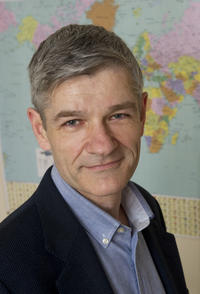 Russia’s growing diplomatic and strategic presence in the Middle East raises interesting questions for academic research on Russian foreign policy. Professor Allison is analyzing the normative and legal dimensions of this new field of Russian international activity. He has also been developing links with relevant specialists in Russian universities and institutes for research and REES student access.

This involves academic activity both in Russia and the Middle East. In October 2018 he took part in a major conference in Moscow, under the Institute of Oriental Studies of the Russian Academic of Sciences, coinciding with the 200th anniversary of this eminent interdisciplinary Russian area studies centre. The following month St Antony’s College hosted a visit by the President of the Institute, Professor Vitaly Naumkin, who spoke authoritatively at a seminar on contemporary Russian policy in the Middle East. In February 2019 Professor Allison returned to the Institute of Oriental Studies for a specialist seminar on ‘The Middle East: New stage, old problems’. This included roundtable discussions with the Russian Minister of Energy, Alexander Novak and Deputy Minister of Defence, Colonel-General Alexander Fomin. In January 2019 Professor Allison attended the first workshop of a two year project on Russia and the Middle East, based at the Centre for Regional and International Studies of the Georgetown University campus in Doha, Qatar. His chapter for the project volume will examine ‘Russian normative claims for its intervention in the Middle East’.  In January he also gave a presentation in the UK Foreign Office, in a seminar series organised by the Eastern Research Group, on Russia’s use of international law in the crises around Syria and Ukraine.